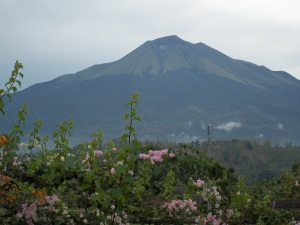 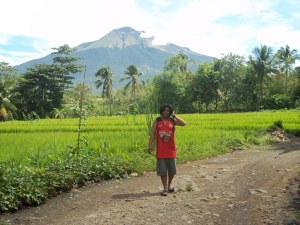 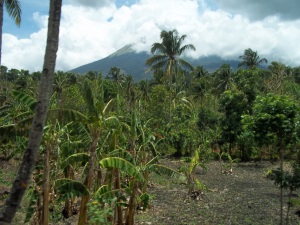 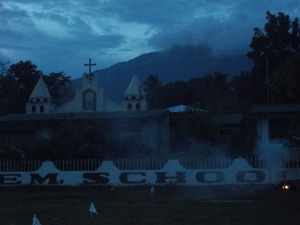 “Only in La Castellana you could get a perfect view of Mount Kanlaon,” declared my hubby Harry. “If you photograph it in other towns, you wouldn’t be able to capture it at its best.”

“…and you don’t have to climb it to commune with nature,” he added. “Besides, no one goes up there without a permit.”

“Why?” I asked. “Is it something to do with the sacredness of the place?”

He explained, “Anyone can freely roam and explore the foothills. However, they (the authorities) limit the number of people to go mountain trekking to avoid further accidents. People died up there in the past because now and then, Mount Kanlaon spews volcanic ash or steam.”

[Yup, despite the serene look of Mount Kanlaon, the PHIVOLCS (Philippine Institute of Volcanology and Siesmology) declared it as one of the 22 active volcanoes in the Philippines that is part of the Pacific Ring of fire.]

“Oh, that made sense,” I said as my brain processed the information.

I’ll take his word for it because he grew up in  La Castellana, an agricultural town at  the foot of the sacred mountain of Kanlaon in Negros Island, Philippines. The mountain was simply spectacular. Its ultra prominent peak looked awesome and majestic when photographed in various locations within La Castellana’s area in any time of the day.

He tried to dissuade me though from referring to the mountain as “sacred”. He pointed out that the modern Hiligaynons regard the mountain as irreplaceable because it affect their daily lives. He stated that throughout the centuries, his family [and the rest of the communities surrounding this mountain] enjoy the blessings of the fertile soil which was perfect for growing rice, sugarcane, bananas, vegetables and fruit trees.

Well, I just couldn’t help it due to the myths I’ve discovered about it — that Mount Kanlaon was an abode of the gods worshiped by the early inhabitants who practiced animism. [I made an analogy in my mind that Mount Olympus is to Greeks while Mount Kanlaon is to Hiligaynons.] Anyway, here’s a version of the story I’ve heard:

The Myth of Mount Kanlaon

In ancient times when huge serpents roamed the world, there lived a malevolent seven-headed dragon on the peak of a huge mountain. This green-eyed creature was a ferocious steam-belching and fire-breathing dragon who brought havoc to the villages at the foot of the mountain. Many brave men from various tribes attempted to kill this beast but they all perished — scorched and roasted alive.

As the rampage of the dragon escalated, the alarmed leader named Datu Matog gathered the head of the tribes to come up with a plan to stop the dragon.  A babaylan (tribal priest) suggested that they need to offer a sacrifice — a fair maiden must be offered to each dragon-head to appease the serpent’s wrath. They all agreed to this; they appointed the babaylan to choose the sacrifice and they set a date for the ceremony. They also sent a messenger to tell the people of their consensus.

Upon hearing the news, fear seized the villagers for nobody wanted to offer the lives of their daughters to the monster. To avoid being chosen, the lovely maidens painted their faces with soot to look undesirable and ugly. When the babaylan reached the villages, he found no pretty girl in sight. After a month of searching, he returned to Datu Matog to report that most of the ladies have scorched faces except one, the girl named Talisay, Matog’s daughter.

For days, Datu Matog prayed to the gods for help. The gods took pity on him and they sent help in the form of a stranger named La-on, a fearless warrior from a far away land. When La-on arrived at the village, he sought and conveyed to Datu Matog that the gods sent him to kill the dragon. The tribal leader saw hope; he then ordered his people to prepare a provision for La-on’s journey to the mountains.

So with blessings and food supply in hand, La-on set out for a two-day hike toward the lair of the beast. The villagers were skeptical for they knew what happened to the men who tried to kill the dragon. However, unknown to the people, this valiant warrior had a special gift — he could talk to animals. As La-on trekked the dense forest, he used his gift to persuade the queen ant, queen bee, and hawk to aid him on his quest.

All three species-leaders obliged to La-on’s request; they summoned their minions and went to the peak of the mountain. The dragon knew he was in trouble when he faced the army of various creatures. The ants crept within his tough scales and bit his skin; the bees swarm the seven heads and stung the seven faces while the hawks slashed their sharp talons and beaks on the various parts of the dragon.  The beast fought back but despite the steam he belched and the fire he breathed, the superior forces of the ants, bees and hawks depleted his energy.

At the lowlands, the people were anxious as they heard high-pitched shrieking echoes and thunder-like sounds; they also saw the peak of the mountain blazed with fire. Datu Matog decided to send some of his troops to find out what was going on in the battle. A group of able-bodied soldiers led by Datu Sayag left at once and climb the mountain. When they got there, they saw how the creatures fought monster as La-on hacked the heads of the dragon one by one. They helped him cut the monster’s body into pieces.

When they got back to the village, Datu Sayag reported Laon’s bravery to Matog and other tribal leaders; they were all grateful for his help. As for Laon, he made the people promise to respect the lives of the various creatures living in that mountain and not to destroy their habitat. He told them that as long as they kept this promise, the gods would bless the land and if they ever forgot, the gods would brought back the dragon. The people then pledged to protect the land surrounding the mountain.Later on, they called the mountain Kanla-on [“ka” means for in Hiligaynon] in honor of La-on’s heroism.